Raisani threatens Political opponents: I am coming after you before you pursue me 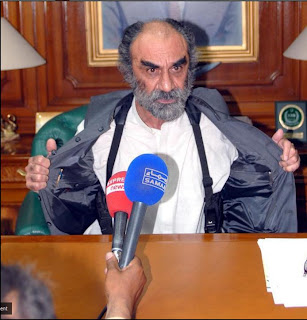 Quetta: Chief of Sarawaan chief minister of Balochistan Nawab Raisani said that Balochistan situation being deteriorate intentionally to push Baloch nation toward civil chaos. While talking to NNI, he said “Balochistan is my homeland, because my forefathers belong to this land and Pakistan is my home because within its framework we will get our constitutional right. If all are going on the path of destruction, I will not be a silent spectator to all this.”
He further said that the settlers living in Balochistan are our brothers; they have been serving this province for several decades. They have brightened the Educational institutes with the light of knowledge but instead they are being humiliated and corpses are being sent to their homes. He said I would ask these people to stop destroying the Baloch and I urge the Baloch Nation to question those who are determined to destroy Baloch traditions before the world.
Those who are targeting innocent people I don’t consider them Baloch and if anyone doesn’t consider me Baloch; I don’t need a certificate of being Baloch from such miserable people’s University.  Some so called Nationalists and terrorists who kill innocent people are creating hatred in Baloch populated areas hence they pushing Balochistan towards a civil war. These people are also threatening me and my family.

The Chief Minister said he know very well who were behind deteriorating the situation from Sub-district Bhag to Kolpur and Kalat and Khuzdar and “I want to tell them clearly that I am coming after you before you peruse me”.
He said today also he was following the philosophy of Mir Ghaus Bux Bezinjo because he had said that “Pakistan is our country and we all have struggle for our constitutional rights within Pakistan”. Mir Ghaus Bezinjo had also said that if Pakistan breaks apart then we’ll kill and destroy each other because we Baloch do not tolerate each other, Mr Raisani was quoted as saying by Daily Intekhab Urdu News paper.
The Chief Minister said that “even today I am struggling for the right of oppressed nationalities and for a stronger Pakistan in accordance with 1940 resolution.  I still demand for a new social agreement to give rights to the people of all units and I ask Baloch, Pashtun, Punjabis, Sindhis and all other nations dwelling in the country to stand up to killers and terrorists who are busy conspiring to weaken the roots of this country for their evil purposes”.
Posted by Reporter at 3:37 AM No comments: