Parody: What Knowledge I Have?

Hasil Bizenjo:
My father's footsteps is what I follow, I am my father's image so No Comments on that. I am not going to shout for freedom after all we are businessman and we can’t share our profits with anybody without paying any interest.

I want my Baloch nation to understand that now i am at my last stage of life and it’s impossible for me to cry for freedom, i hope to get my due share from NP as soon as possible.

Dr Malik:
I Don’t understand what is Nationalism, in my dictionary it states to do what is best for yourself and question your nation over it & Allahmdullah I do that with many tricks up my sleeve. I and my Party members are Baloch nationalist but we have our interest as our first priority the rest come later.

Asad Baloch:
The smell of Fresh lemonade air of parliament gives me strength to shout for the rights of my nation, but due to my impotence i am always at the back of the stage where my cry doesnt reach the ears of those responsible. Hope to serve my nation another 5 years.

Aslam Raisani:
Slavery is another form of freedom Baloch nation has to realize that they should form another agenda and work towards their progress within the platform of Pakistan and leave those handful thugs who ask for your freedom while you have full freedom but you have to limit yourself under Punjabi rule.

Zafarullah Jamali:
Musharraf is needed in these times, we lost our assets like Shaukat Aziz & Musharraf both of them were in good favor of Balochistan and were good friends of mine hope to see Chaudhry Shujaat soon elected as the prime minister, PML Q is the only party which favored the military operation in Balochistan to finish those thugs disguise as freedom fighters of Balochistan.

The one that has no knowledge of my ancestor calls me Suleiman Dawood while other notable Baloch call me His Highness, the sound of this I like the much. I don’t care if the rights of Baloch nation are given to them or not but I should be called His Highness whenever I am at the center of discussions. The other thing is that my nation should understand it is not so easy to walk in ICJ (International Court of Justice), it will approximately take many years for me to walk inside that building and for these years Baloch nation should hold back.

Lashkari Raisani:
I have written my resignation letter and fax it to President Asif Ali Zardari if the appropriate action are not taken then I will move away from the party, next day I have an appointment with Asif Ali Zardari and I assure you that I will bring positive news to you.

Liaquat Baloch:
Asking United States for our rights lead us to Kufr, Pakistan is for all of us and mostly it is for those who have a big tummy to consume large American dollars. Balochistan is under turmoil because of foreign elements mostly America, India & Isreal, Pakistan is the innocent little child in a game of deception played by these beasts. Baloch nation are patriotic Pakistan "Although I believe that they hate Pakistan mostly".

Governor Magsi:
Out of Curiosity I sometime become a nationalist by exclaiming for rights of Baloch nation and when I get to much surprises at the same time I cancel those entire previous one with a new and refurbished statement, but I promise that Balochistan will receives it rights but accompanying with some flexible projects for the advancement of Punjab.

Deception is what I do best, even I fooled Musharraf who has always thought himself as a smart ass and I turned him into a jack ass, my nation they are like cattle’s (lead them to their doom and they will follow behind), I said that I am the spokesman of Brahamdagh and they took it seriously, I enjoyed the show & drama in the Bangkok Conference while the guest were unknown to the fact that this conference is held under ISI's policies, I am the clever fox now a days, I don’t play with old school methods.

Sanaullah Baloch:
I must have the sheer knowledge of working under UN's stressful council session, I have the full knowledge of UN charter and i am the only Intellectual to know about the word "Self-Determination" while the rest are confused in their theories of misconception.

Confusing it seems but I don’t like to shout on any of nation's interest, for me the mutilated bodies don’t count I will say that "As you sow so shall you reap ", Stop crying for freedom and you won’t be killed.

Dr Wahid (BSO-NA):
For sometime I enjoyed being the center of discussion it doesn’t matter if they were abusing me, I always wanted to be the celebrity, while mostly I am jealous with Nawab Khair Bux Marri and Balach Marri's fame but I assume that I can play my cards well too.

Pakistan Muslim League has promised to give the rights of Balochistan to them, they don’t just promise but they mandate with their promise not like Rehman Malik, if I was to be elected Chief Minister then I assure you that "No Brother will Kill another Brother" I have full experience on it.

Imam Bill:
National Party's Political objective is to serve the people through life taking drugs and I am with them on National interest to spread drug addiction in whole Balochistan to mobilize the Drug dealers is what we aim to do, hope our nation helps us to achieve our goals by electing National Party. 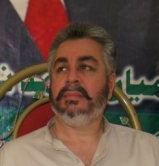 All I know is that my father is the main obstacle between me and the immense wealth hidden in the shape of Natural resources in Kahan, and that in order to get wealthy I need to get rid of my Father and Brothers, and bow my head in front of Mr Nawaz Sharif.
Posted by Reporter at 11:04 AM No comments: